We have been told for many months that there is a problem of drug shortage in Spanish pharmacies. According to the dictionary of the Royal Academy, “shortage” is the lack of certain products in a commercial establishment or in a town. And that is exactly what is happening: the lack of medicines, among them some as well known and demanded as Adiro, Nolotil injectable, Dalsy, Almax, Bactroban, Hemovas, Urbason, Seguril, Trankimazin, Adalat, Daonil, Dolalgial, Bexsero (meningitis vaccine) and generics such as paracetamol/acetaminophen and valsartan.

What does the AEMPS say?

Since 2008, the AEMPS publishes on its website information on the problems of shortage of medicines for human use, keeping this information permanently updated in a list of active supply problems and in a list of active supply problems solved in the last six months. Last July the record was broken with 561 drug presentations affected. However, they only represent 2% of the 32,000 authorized presentations in Spain.

In its 2018 Activity Report, made public a few days ago, the Spanish Agency for Medicines and Health Products (AEMPS) reported that 1332 presentations of medicines for human use were affected by supply problems last year. A supply problem is a situation in which the available units of a drug in the pharmaceutical channel are lower than the needs of national or local consumption.

The shortage of medicines can occur for many reasons, including the revocation or suspension by the AEMPS of the marketing authorization due to quality problems; discontinuation in manufacturing due to lack of active ingredient; technical and logistical factors; delay in distribution; increased demand in new emerging markets; commercial reasons; economic interests; or even the withdrawal from the market of medicines already available for sale to the public when the application of new regulations requires that the text of the leaflets or packaging be modified.

The AEMPS points out that 37% of the problems in the first half of 2019 were due to manufacturing difficulties, which can vary widely, from improvements in facilities to changes in the manufacturing process. For example, the irregular supply of Adiro (acetylsalicylic acid) was attributed to problems caused by the reform and modernization of the Bayer plant in Leverkusen. In the case of Dalsy (ibuprofen) it was due to the need to correct an error in the leaflet that was detected in some batches to be placed on the market. And with regard to Nolotil, insufficient manufacture of metamizole by Sanofi, the main supplier of this active ingredient to pharmacological laboratories. Capacity problems are often caused by an increase in the demand for the drug which the available production lines cannot cope with. Altogether, manufacturing and capacity problems have accounted for 60 % of the total causes. 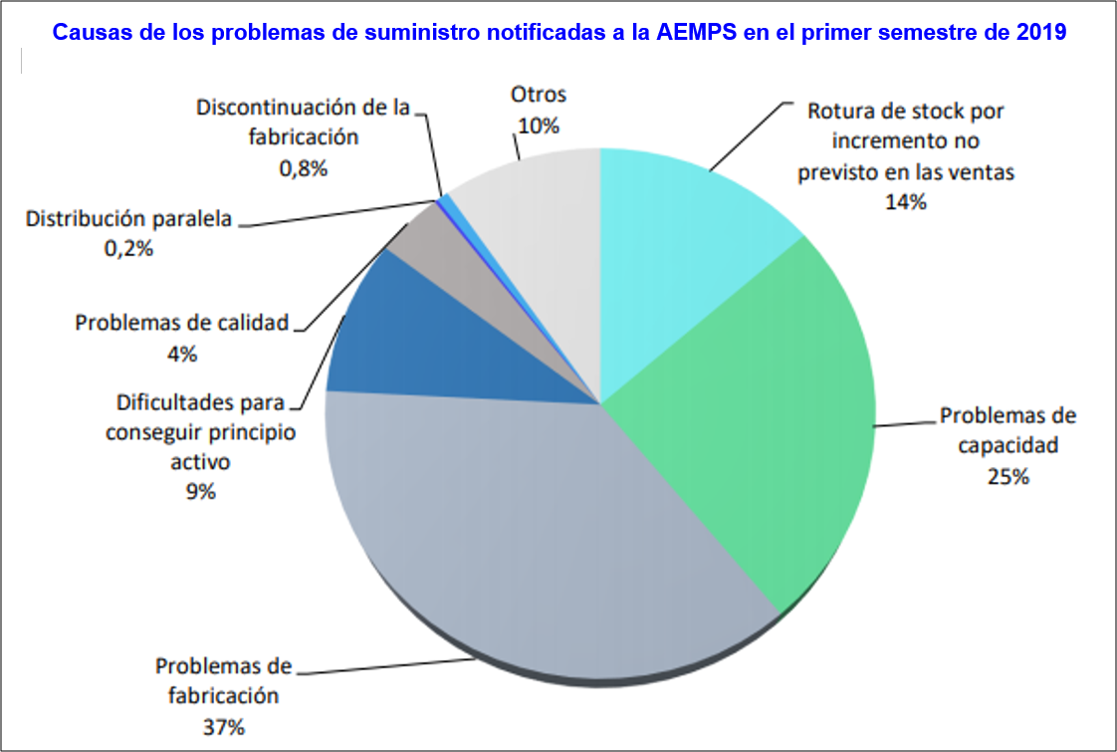 The shortage does not only affect pharmacies. According to the Sociedad Española de Farmacia Hospitalaria (SEFH), for the last two or three years, Spanish hospitals have been suffering from a shortage of the same medicines and some 30 intrinsically hospital medicines, particularly the cheapest ones.

Does the shortage happen only in Spain?

Neither is the lack of supply an exclusive problem of Spain, since it affects other countries of the European Union. For this reason, the EAHP – made up of 35 organisations – asked the European Commission at its annual congress, held this year in June in Edinburgh, to take measures at European level against drug shortages, since national strategies are not sufficient, according to the results of surveys carried out among hospital pharmacists in 2013, 2014 and 2018.

The results of the 2018 EAHP survey indicate that shortages in EU hospitals mainly affect antimicrobials, vaccines and cancer drugs. 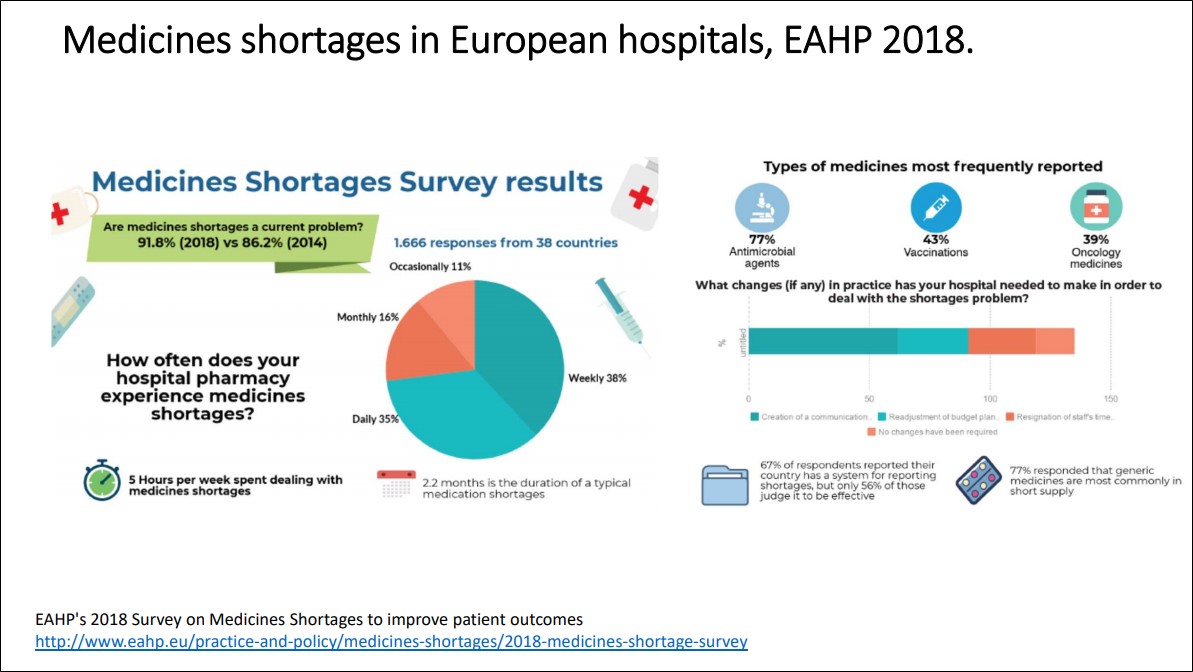 Lack of supply has captured much of the work of the AEMPS during 2018, which has actively participated in the EMA-HMA-European Availability Commission working group, in order to characterize drug shortages and find appropriate solutions. In addition, in order to improve communication and facilitate access to information, in 2018 it began publishing six-monthly reports on the situation and actions taken to tackle supply problems in Spain.

It also intervened in 608 cases to counteract the welfare impact of the lack of medicine until the reestablishment of supply. For example, by authorizing the exceptional marketing of units labelled in French, Flemish and German.

In addition, on May 8, 2019, the AEMPS 2019-2022 Drug Supply Guarantee Plan was approved to address supply problems. The Plan includes contributions from various professional groups, patients, industry, distributors, autonomous communities and other institutions.

What does the EMA say?

The European Medicines Agency (EMA) has also taken measures with the aim of tackling the problem and has published two guides in 2019: one aimed at guiding authorities to detect and report problems and another on good practices for communicating to the public the availability of medicines, with recommendations for national authorities.

At the same time, it has indicated the importance of notifying shortage problems when they affect one or more member countries of the European Union. For this purpose, it proposes an example of a form with the minimum data necessary to report the problem in question (date of start of the shortage, countries concerned, products authorised with the same indications, etc.). The intention of the EMA is to start a pilot programme in the last four months of 2019. 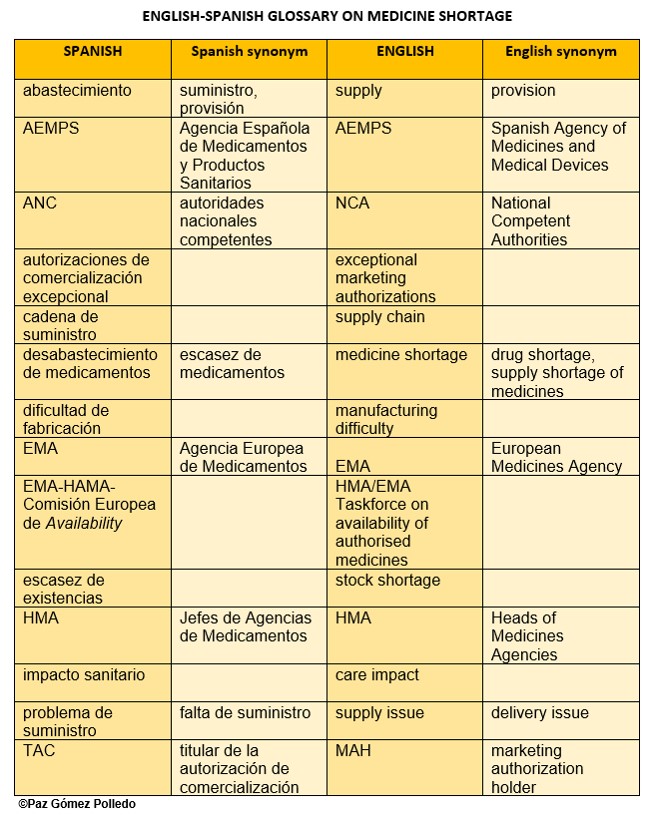 HMA. Availability of medicines for human use. 2019.

You can find out more about which cookies we are using or switch them off in settings.

This website uses cookies so that we can provide you with the best user experience possible. Cookie information is stored in your browser and performs functions such as recognising you when you return to our website and helping our team to understand which sections of the website you find most interesting and useful.

Strictly Necessary Cookie should be enabled at all times so that we can save your preferences for cookie settings.

If you disable this cookie, we will not be able to save your preferences. This means that every time you visit this website you will need to enable or disable cookies again.